Summer may now be done and dusted, the lengthy spell of hot weather behind us yet still nowhere near enough rain has fallen. Parts of this post may already feel irrelevant, however once you visit Lake William Hovell you will feel compelled to venture back time and time again, all through out the year, although swimming in the lake would be a gutsy move in the middle of winter.

Popular all year round for its fishing, namely Trout and Redfin (English Perch), it is not uncommon to see at least one person or group wetting a line, whether it is out of a boat (restrictions apply to the lake), kayak or even off the bank. During summer the lake is also a popular swimming destination as well as a fantastic place for a picnic lunch.

This particular summers day was, you guessed it BLOODY HOT AGAIN, so we packed a picnic lunch loaded the rugrats into the Ute, met up with my parents and made our way to Lake William Hovell for some fishing and swimming. upon finding an area of the lake to set up next to, we set about trying our luck at catching a fish or two, with even the kids having a go. I was amazed at how well my daughter, Cailin, was able to cast and retrieve by the time we left, she is only four. On this particular day the fishing was uneventful. I guess there is a reason it is called fishing and not catching. It was then time for a swim and a cool off, something the kids were really looking forward to.

If you have never been to Lake William Hovell before, it is really quite amazing how crystal clear the water is. I remember visiting the lake a few years ago with some mates, I looked into the water and I could see a camp chair submerged what looked like about 2-3 feet below the surface. Todd, who is over 6 foot tall, jumped straight in and fished the chair out of the lake, to get to said chair we estimated it was at least 8 foot under the water, yet like I said to look at it you would have sworn it was only a fraction of that distance, that is how clear the water is. Said camp chair is still stored in my shed as I write this.

On completion of our lakeside lunch, it was decided to venture home via the bush and come out at Merrijig, west of Mansfield. To get there we had to make a choice, head up the steeper more direct Buckland Spur Track, or the least heart stopping choice, Evans Creek Track. Both tracks are an enjoyable drive in a four wheel drive and both offer differing views of the same environment. If you get the chance to drive along the plateau of the Buckland Spur Track let me know what you think, I find it amazing that you are at such an altitude yet it feels as though you are driving through some flat open scrublands.

Both the Buckland Spur Track and The Evans Creek Track are subject to seasonal track closures, so if you are looking for a winter adventure then you will need to look elsewhere unfortunately.

Looking back along Evans Creek Track.

On this particular occasion we chose to travel along the Evans Creek Track. We were one passenger short in the trusty Triton as Cailin had ditched us and decided to go in Nan and Pops Ute. I’m not sure what was said over the next 13km or so of dusty bush tracks as Cailin came up with the nickname Dust Maker for me, I was the lead vehicle after all. Dust Maker seems to have stuck with both of my cheeky little monkeys randomly reminding me of my new nickname.

Roughly half way along Evans Creek Track is a small unnamed hut that backs onto the obviously named Evans Creek. If you know this hut and/or know the name of this hut let me know, I would be interested to know a bit more about its’ history.

After stopping for a short look around, it was back onto the tracks and continue along until we joined up with the Buckland Spur Track. We then continued along The Buckland Spur Track on route to Tomahawk Hut. Just before pulling up at the hut there was a rather large unavoidable mud puddle which had a smell that resembled a messy effluent pond. 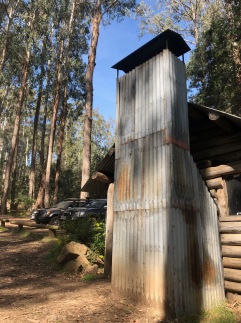 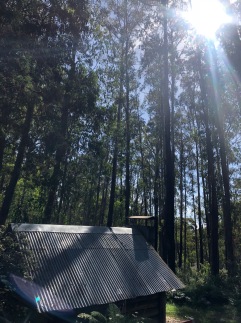 Look at the amazing reach of the bush surrounding Tomahawk Hut.

After a little break, some photos and Cailin entertaining us by cooking everyone pretend marshmallows on a pretend camp fire that she made, it was time to make our way out of the bush, along Carters Road and then onto Buttercup Road. Always on the look out for a new camp ground to try out one day, Buttercup Road came up with the goods with a number of sites situated along the Buttercup Creek, some even having relatively new “Drop” Toilets to make the site that little bit more inviting.

I love seeing the imagination of my kids at work.

Checking to see if anyone is home.

From there we made tracks for Merrijig and Mansfield. Along the way there is some amazing properties and homes that have, what I would describe as, Multi-Million Dollar views, you could say I may have even had a little fan girl moment over some of them properties. Finally we dropped out at Merrijig and made our way home, allowing us to complete an awesome day out with the family creating many memories along the way.

If this story has given you any form of inspiration to get out and explore then leave a comment or even drop me an email, I would be interested to know where you ended up.

Lowering your tyre pressures when you go 4wding is important, however what is also important is to reinflate or “air up” when you leave the tracks.
“You go first”
Have you checked out our latest YouTube video yet?
Tell me this doesn’t make you want to find a river in the bush?
This was a fun little trip to put together, we got to experience the stunning Lake Cobbler, the beautiful King River Hut and setup camp at the picturesque Pineapple Flat campground. Along the way we got experience some amazing views and high country streams and rivers as well as one track that meant we had to cross the King River about 6 times.
This weeks adventure video sees us cross this stunning River a number of times, yep water crossings.